I had to go without a title, because the best title would give away the end of the story.

I ended the day with Mark O’Donnell, who came down for a visit. It took us a long time to find a place for dinner. We sort of set the bar (at a bar) last year with our visit to Kimski, the Polish Korean fusion restaurant in Chicago. Standard pub fare was not going to cut it this year. We had planned to meet near midtown, where my last site of the day was, but the selection of interesting restaurants, once filtered by affordability, was very low. We decided to meet in Hell’s Kitchen hoping for better luck. Mark was waiting for me at a bar. We googled for restaurants, but didn’t find any that seemed worthy in the area. Mark had some extra cash value on his Metro card, so we headed down to Greenwich Village, thinking “we’ve got to be able to find something interesting there.”

We people- and performer-watched in Washington Park until we were good and hungry, then struck out to the south in search of victuals. We wandered up and down the streets in a six block area, noting places that we could come back to, but no place called us loud enough to go in. After about half an hour, we had all but given up, and headed back in search of places we had noted on the first pass. We went down a street, looked at a menu for a place I can’t find even with Google street view, thought, “This looks OK” and went in. It wasn’t long before we came back out – the music loud and not conducive to conversation, so we continued on, in search of the first place we had noticed.

We never found it. We were headed down “one last street”, when I spied a small restaurant on the other side of the road called “Cuba”. It looked good, and Mark hadn’t yet had Cuban food. We crossed over and checked the last hurdle on the menu outside – was it affordable? Yep.

After some wavering at whether to eat at the bar or eat at a table downstairs, we ended up downstairs in a tiny room whose ceiling opened to the bar and restaurant upstairs, which allowed us to hear the Cuban music and murmur of conversation upstairs, and made the room feel larger than it was. We had a truly excellent meal, complemented by my excellent mojito and Mark’s excellent Cuban rum. I’ll sum it up by saying that the first half of the meal had scant conversation other than Mark saying “Oh, man” after each bite of his masitas de cerdo. You might remember I did the same thing back in Week 0. I’d tell you more about the meal, but my time is limited today, and I want to relate one other memorable incident earlier in the day, one that so clearly highlighted the fact that I work with teenage girls.

It is robotics week for three of my classes. And while the Accenture class was busy making their robots dance and play music, the class at BlackRock had a special guest. Michael Jamet is an BLK employee with an interest in robots. He brought smart circuit boards with multicolor LEDs on them that looked something like this (I can’t for the life of me find the ones he actually brought): 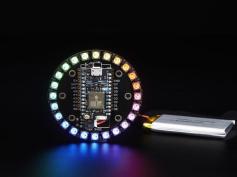 When you plug them in for the first time, the LEDs light up in a series going up either side of the circle. First one, then two, then three LEDs on each side, creating a rainbow of color. When hers turned on Sarah’s voice rang out like a bell across the room, “Hey, now all we need is glow sticks and skimpy outfits!” (which was going to be the title of this post).