I’ve only seen two cats so far, both of them last night as I walked around Jerome Park Reservoir. The first was a gray and white cat, round, blue tag on its collar, lying atop a retaining wall with its front paws folded back in, in the way members of the cat family, but few other animals do. Maybe goats. The other cat was a young, orange and white striped cat, slipping out curbside from under a parked car. Although it was only mere feet away, it took no note of me, and continued on its prowl. His eyes were reddish and swollen around the rims.

Dogs, on the other hand, have been a different story. There are all kinds of dogs here. Well, maybe not all kinds, but a lot of them. What kind of dog you see seems to depend on where you are in the city. We don’t even have to talk about midtown. No dogs there, except maybe hot dogs.

The first couple of days I was here, I was pretty much either in midtown or Kingsbridge, which is the neighborhood next to where I live, and is where most of the stores and restaurants around me are located. I spent a fair amount of time walking on Broadway there, and saw mainly one kind of dog: white pit bulls. (I know, I know, American Staffordshire Terriers. It’s too late at night to type all that.) I must’ve seen four of them, and not having seen any other dogs, this stuck in my mind. Since then, I’ve seen a number of other dogs around this area, but pit bulls are, by far, the most common. I’ve seen a lot more colors of them, too.

Today, I got myself into a different neighborhood: 96th street on the West Side. No pit bulls there. Most of the dogs there were what I’d call lap dogs – Lhasa apsos, terriers, and the like. I saw two people who stopped to talk to each other – the woman had two little white dogs, and the gentleman had four, which had neatly braided their leashes so that only about two feet at the end was untangled. I saw an ancient Yorkshire terrier – it didn’t need a leash because it was too old to move very fast or maybe even at all. There were also quite a large number of dachshunds in many colors and styles. All of this I saw in a short three block walk toward Central Park.

Apparently, Central Park is where the big dogs go. And it is where the big dogs go. See what I did there? It works better if you read it out loud in your brain and slightly change the emphasis of that last word. (And they say that Mandarin is hard to learn because it is a tonal language. Ha! Try English.) But seriously, there were more big dogs there than little, and more big dogs there than I’ve seen anywhere in the city. I saw one elderly woman with three elderly German Shepherds – one leash in each hand, and a belt around her waist for the third. The one breed of dog I haven’t seen at all, curiously, is Labrador Retrievers. I’ve seen a few Goldens, but no Labs.

I’m writing a short one tonight, because I got back late from my adventure (where adventure = get on the 1 train, get off at a random stop (I was originally planning to go way downtown, but hopped off 96th because, on my daily commute, a lot of people get on and off there simultaneously), mosey into the West Side Arts Coalition salon show (when you walk out the subway station door and the sign across the street says “Gallery Open”, you go in), meander down to Central Park, eat a hot dog (what is it with me and hot dogs these days?), traipse through the park down to 72nd, wander around 72nd and Broadway, find Levain Bakery (it was suggested to me as having the best cookies ever, but the line was too long for my purposes today – I’ll be back), get caught in a thunderstorm (I found a construction awning to hide under), ramble around in circles trying to find a place for dinner (I didn’t care what kind of food it was – I wanted to eat outside, or at least near a window, but all the outdoor seating was wet), ended up at what seemed to be a Chinese/Latin fusion restaurant (La Dinastia), discovered that they weren’t fused, but mostly just side by side, ate masitas de puerco fritas with fried sweet plantains (it’s Cuban – if you haven’t had Cuban food (for me it’s been since maybe 1999 – way too long), it is SO GOOD, and almost always comes with a fresh tomato and iceberg lettuce salad that, in this case, paired perfectly with the fried pork chunks – I can’t even describe how the masitas crunched on the outside and were so tender and flavorful inside – I wish I could, but no), and then made my way home. Somewhere in there, I took this picture. Which just goes to show you that NYC is an LGBTQ friendly city. 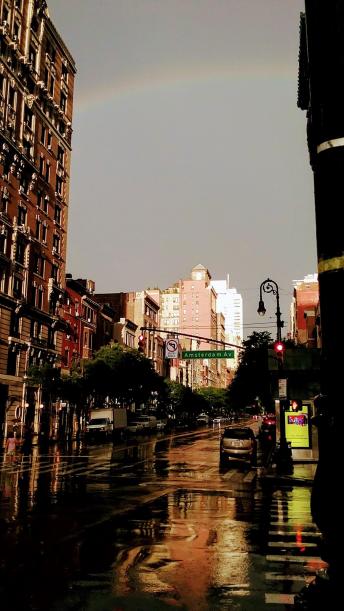 6 thoughts on “W0D6 All who wander are not dogs”