We had a reporter from the Chicago Sun-Times stop by the classroom today (this has been scheduled for a while now) to gather information for an article on GWC at Accenture. It should appear in Wednesday’s C S-T. I’ll post a link.  While she was interviewing the TAs and a few of the girls, I had the good fortune to have a conversation with Bill, an Accenture employee whose daughter happens to be a TA in another GWC class in the Chicago area.

I mentioned that I have one too. Many of you know that technology works better when I stand next to it. For example, and this really happened back toward the end of May, a student tried to print something to the library printer at school, but it wouldn’t print. So I stood next to the printer and told the student to try again. It worked. This has happened to me countless times. I can count on it working about 90 percent of the time. This was especially handy when I used to work in tech support. I could walk a customer through a procedure and it would work, even if they had just done the same thing a few minutes before.

Bill smiled and nodded. “I left tech support for that exact reason. It annoyed the customers when I did that.” Imagine! I just found somebody with the same superpower as me! Totally awesome and totally rare.

I have other superpowers, too. I have the uncanny ability to drive into a city I’ve never been in before and drive right to our destination. No map needed. I’ve done that several times, too.

My point is this. I think we all have superpowers: things we can do better than most people with little or no effort. Some of them might be kind of obscure. I think it is our responsibility to figure out what our superpowers and then use them to help people. This can take a lifetime to do. After thirty years of doing something you’ve always been able to do, you suddenly realize it’s a superpower. What’s your superpower? Now you have to figure out how to use it for good, not evil.

Other things from class today:

We now have a mascot, Athena (see her picture below). The girls named her in a gladiator-like battle of names. We started with six names, including: Petunia (my favorite), Athena, Freddie, Flufficity, Edie, and another that is not coming to mind at the moment. I have to thank my TA, Courtney, for suggesting the voting process. With their heads down, the girls voted on their favorite names, and we eliminated the name with the lowest number of votes in each round. Eventually, it came down to Freddie and Athena.

I call it gladiator style because it works the same way gladiator battles of old and modern day Monster Truck Rallies work: You root for your favorite, and when that one gets killed, breaks an axle, or is voted out, you move one to your favorite of whatever is left. Classic.

It also means you don’t pick a name that only has 4 votes out of 18, as you might if you took the first round winner. You always get one with more than half the votes. 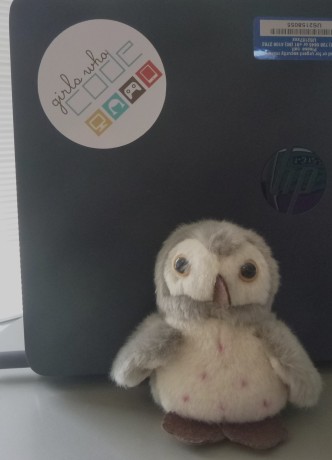 The other thing I overheard in class today. Two of the girls in the class took it upon themselves to write a paragraph of nice things about every girl in the class, and send the whole thing as a group-wide text message. Yep, they’re going to remember this summer.