The scene: I’m hungry. I forgot to take my pill this morning, so I just took it now and I have to wait an hour before I can eat. I apologize in advance if that comes through in my writing.

So, I woke last night around 2am to find two of the six other AirBNB guests here this weekend asleep in the living room, one on the couch, the other propped up in a chair. That can’t be comfortable. Immediately, my mind tried to make sense of the situation. Why aren’t they in their room? Were they drinking and passed out there? Was someone else in their room? Hmm…

I went back to bed and woke again around around 7. I went into the living room, where both guests were awake and asked, “Did you get kicked out of your room?”

“No, nothing like that. I lost my backpack last night, with the keys in it.”

“At Pitchfork. I set it down for a second….” (Pitchfork is a music festival in town this weekend. I don’t know any of the groups except Brian Wilson from the Beach Boys.)

My second thought: Maybe I can at least help him get into his room; my AirBNB host is in NYC this weekend. I know where the spare set of keys is, so I got them. sadly, there are no room keys on it.

I tried my room key. No luck. I always did wonder if all the keys are different. The room keys are those old lever lock kinds of keys. (There’s a nifty animation in that link.) You might refer to them as skeleton keys, though technically…

As it turns out, they are all different. Comforting, but not helpful under the circumstances.

He sent a text to our host. There’s a woman downstairs who helps keep this place clean, maybe she has a spare room keys. During our conversation, the severity of the situation became more clear. His car keys were in the backpack. He and his friend were stuck in Chicago.

There was nothing more to be done at the moment, so I quickly changed and headed off to church, offering to do what I could to help when I got back.

When I got to church, there was a curious sign on the front door of the main church that said because of the hazardous weather warning (possibility of severe thunderstorms) all masses today would be held in the chapel. The chapel actually opened out into the school gym, whose floor, in true Catholic school style, was covered with a tarp so the folding chairs wouldn’t scratch the finish on the hardwood floor, which I will say was in immaculate shape.

As it turns out, the steeple on the church is unstable, so it is not safe to hold services if there is a risk of a severe storm. 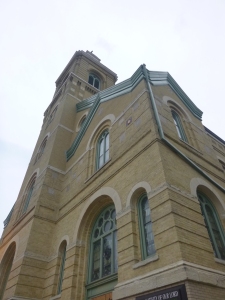 Several times on the way to and from church, as well as during mass, I prayed for a resolution to the situation. For me, this means thinking of the intention, then bringing myself into the present by being as aware of everything around me as I can. I think this helps me connect to the power of the universe. What can I say? It’s worked several times in the past. Of course, it may be coincidence, but I choose to believe otherwise because it helps give meaning to my life.

In the meantime, I tried to think of what we could do to pull off a miracle. First, we’d need to know what the problems were. I knew he had his phone, but did he have his wallet? Then we’d need to know what resources there were. Was there someone at home who could FedEx the keys? He could stay here until they came. I could attempt to disassemble the door lock to get in the room. I brought a few tools – really my multitool. Barring that, we could get a locksmith to open the bedroom door. We could go back to Pitchfork and see if they had a lost and found. If the bag was stolen, the thief would probably look through it for valuables and dump it, so it might still be there. If he lost his wallet, I could get him a CTA pass to help him get around for the day. OK, I had a plan.

On my way home from church, the sky began to rumble, and there were a few drops of rain around. I checked when the bus would come (you can text CTA the bus stop number and they will reply with the ETA of the next two busses). Four minutes, just enough time to walk to the next stop. I walked there, and saw the bus approaching about a block and a half away. Suddenly, a minivan pulled up and stopped right in the bus stop. I walked behind it and flagged the bus. (I’ve almost missed two busses this weekend by not flagging them. The drivers though I was just crossing the street.) The bus zoomed right by. Grrr. OK it must be that I am supposed to walk home (only 17 minutes total, and I was already 6 minutes in). I began to walk, hoping the rain would hold off a bit. 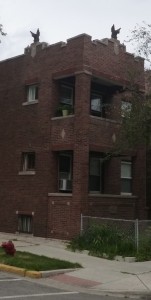 I got to the corner of 34th and Lithuanica and saw these guys looking over me. I’ve been down this street many times, it is treelined, quiet and pretty. Sometimes I detour just to walk or ride down it. I’ve never seen these before. I really like grotesques (technically, gargoyles are grotesques that serve as downspouts), and think that they watch over and help protect me. I took this as a good sign.

I got home just as the big drops of rain were arriving. I came up stairs. Our guests were still in the living room, looking markedly better. I asked is there was any news and what could I do to help. They thanked me for my offer to help, and said that their friend had picked up the backpack last night. They were waiting for a ride to go get it.

A miracle or coincidence? You choose. I already have. Time for breakfast.