You can’t walk around midtown very long, especially in the morning, without seeing one (or two) of the latest additions to the NYPD fleet: Smart Cars. THEY ARE ADORABLE! You have to see these things. OK, here (source:NY Daily News): 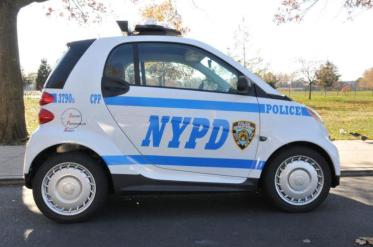 How cute is that? In midtown, they are mostly used for parking enforcement. (Side note: What is it about New Yorkers and double parking? (I have a feeling I’m stepping into Seinfeld territory here). It makes bike riding exceptionally hazardous, since I have to frequently ride in the driving lane of roads where cars are going pretty fast. I hate zooming in and out of traffic.)

But the Smart Car is really good at zooming in and out. It is excellent for parking enforcement because it can do a U-ey (I had to look up how to spell that) on an avenue, and can fit into tight spaces, so it doesn’t have to double park to issue tickets.

That being said, I do not have full confidence in them. I was walking home from the train the other day, and there was one responding to an emergency (even using its Rumbler siren). It zoomed (because that’s what they do) around a corner, weaved through some traffic (they are really good at that), and was on its way. All I could think was, “Where are you going little car? What do you think you will do when you get there? Don’t you think you should wait for some of the big cars?” I feared for its safety. I saw it today, though, safely parked behind the police station.

I had planned to write something about the “Google manifesto”. Not surprisingly, it’s making waves in the circles I am traveling with these days. I’ve read the document closely, including most of the references. I am going through it one more time and still have to double check some of the references. I think this is part of a larger cultural thing that is happening, and is related to the White Supremacy protest in Charlottesville, the recent presidential election, and to some things that have been going on in Europe around the refugees there. I still have more work to do, including re-finding where I got my working hypothesis. That’ll be the hard part.