I’m pretty sure yesterday or today is the halfway point of my stay in NYC. I know this because my MetroCard expired (I only missed the train that was in the station as I tried to swipe through) and I had to re-up for Ellie’s humble abode. There was no one thing today that was quite enough for a whole post, so I have four topics today, though who knows if I can get to them all; I am logorrheic, after all.

The first is something that could happen other places, but is so emblematic of GWC that I must relay it. An instructor, a student, and a worker at a particular site were riding the elevator up to the floor with the Girls Who Code classroom this morning. The worker asked the instructor, “Does anyone in your class speak Bengali?” The student answers in the affirmative, in Bengali.

I probably should go in chronological order. Today was the first day I spent an entire day in the same classroom. I didn’t plan it that way, but, you know. I was in the same classroom yesterday because one of the teaching team was out sick. They were working on a particularly difficult section of the curriculum, one where a single character change can break the code in a way that is hard to decipher, and render it difficult for the girls to move forward in the tutorial. I left a little early yesterday to visit another site, but heard from the teaching team at the first site, later in the evening, that they were having difficulty unsticking some of the computers. I said I’d stop by in the morning to help them get unstuck. I planned to spend the afternoon at another site where they had a guest speaker talking about computer security.

As it turns out, they were having a pretty good guest speaker at the site I was already at; one that hadn’t made it onto the calendar. The speaker was Meg Urry (rhymes with fury), who is often recognized for, among her other achievements, this Washington post piece, which is well worth reading.

She spoke to the girls briefly about her research on black holes, then began to talk to them about gender inequality in science, especially computer science and physics. She was frank and forthright, said “shit” and “bullshit” a couple of times, and really engaged the girls. Not all the girls asked questions, but those who did asked excellent ones.

There were several references to white men and how blind and unfair they can be. I was the only white male in the room, though one of the instructors, also male, is from China. I did not take offense at what Meg or other people said, because I have seen the evidence for what they are saying with my own eyes. It’s the reason I do what I do.

The ride home was a little interesting, kind of like train station roulette. At 79th Street there was an announcement that the next a stop would be 96th street, skipping over 86th. Anyone who wanted 86th had to get out and wait for the next train. That was the easy one, because it was announced in an underground station, and you could hear it pretty well. The next was announced above ground, where the sound doesn’t echo so well. The speaker in our car kept cutting in and out (it was sort of like being at a dilapidated drive-in), so all we got was ‘Nex op three str”, and had to decide our fate based on that. To heighten the excitement, the announcer added 100 blocks to the station numbers, so I could sort of make out that the train was not gong to stop at “three ty ate str”, but I think she meant “two ty ate str”. I stayed on, knowing that whatever the case, the train could go no farther than 242nd, where the tracks end.

I got off there, and proceeded to walk the six blocks back to my stop when I glanced across Broadway. Something I never noticed before caught my eye, although I have been by that intersection at least half a dozen times. Just inside the gate of the park, there is a large rock with a statue of, what looked to me like, a wolf. Here is a picture I took.

In fact, it is a statue of a coyote. To my eye though, it looks more like a wolf. Here is my favorite silhouette comparison.

And here is a more general comparison: 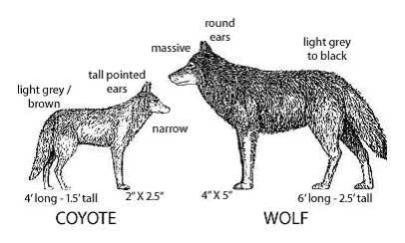 I still think wolf, but here is proof of coyote, from the rock:

The statue was erected in 1998 to commemorate the reappearance of coyotes in NYC for the first time since 1946. The particular coyote in question was spotted on the Major Deegan Highway, about a block away. I won’t say what happened to it, but you can read it here.

That last site has proved to be a boon! It lists “All the weird attractions, hidden sights, and unusual places in New York.” I’m making plans now.