In our quest for accuracy, I must correct what I said yesterday. I was wrong. The Viacom building does not have 18 elevators. I missed a bank. There are, in fact 26 elevators. I know this because in the process of obtaining an ID and visiting the classroom there today, I rode an elevator in three of the four banks (with 6, 6, 6 and 8 elevators each – the math is homework).

First, of course, I had to get to the building (you might remember that it is in TImes Square). It typically takes about 50 minutes to get there by train. I didn’t want to risk being late (I had a 1pm appointment to get my ID) so I left with an hour and twenty minutes to get there, you know, because things don’t always go as planned. I walked down to the 238th Street stop as usual, except it was 93 degrees. I climbed up to the station, noted that all the turnstiles said “No entry”, and then heard the voice of the station attendant yell, “No service at this station. All trains are running express to the 215th Street station.” You see, I had forgotten about the planned change in service, which I had read about many times. Here is tomorrow’s notice, because today’s has already expired (that is also why there is not a link. However, if you are interested in finding planned service changes in the future, you can use this link)

For service to these stations, take the Bx9 bus instead.

For service from 238 St, walk or take an uptown Bx9 bus to 242 St and transfer to a South Ferry-bound

to 242 St and transfer to a South Ferry-bound

You see, I read the notice (it’s posted about 30 times in the station), thought about it, then disregarded it because between 10:45am and 3pm on a weekday, I’m usually downtown. Today, however, I decided to do my early morning stuff (like attendance) from home, because I didn’t have a particular site to be at, and I knew I’d be downtown until after 8pm (another Meet and Greet). It’s just plain old easier to do that stuff at my desk here rather than at a site, where I have to try to get WiFi up and running, and may not necessarily have a flat space to work. There was no table space in the classroom yesterday, so I had to actually use my laptop ON MY LAP!

All this meant that I had to go back down the station stairs, walk up to 242nd Street and climb back up again. Having gotten up there, I realized the cause of a phenomenon I noticed yesterday. When I boarded the train at 238th (the second stop on the line), I moved down the platform toward the rear end of the train hoping to find an emptier car, so I could sit all the way downtown, only to discover that the last two cars of the train were packed almost to standing room only. That struck me as odd, because most trains fill from the middle – people don’t like to walk down the platform to board the ends of the train. So, why would the last two cars be full, and the rest of the train mainly empty. Press pause here, and see if you can come up with the answer.

OK, I know you didn’t press pause. Man, are you ever into instant gratification. You know, there is benefit to trying to actually work through these things. You know that, right? Hereis the answer, lazybones: since 242nd is the first (or last) stop, the platform makes kind of a giant E shape. The trains go in the empty spaces outlined by the E. The stairs are connected to the vertical part of the E, so everyone boards that end, because they don’t like to walk down to the end of the platform. Same people rule, different station configuration. I hadn’t considered that it might be a dead end station. The trainyard swings out to the west around 240th. I walked by it this morning. I could hear the train cars gently snoring. 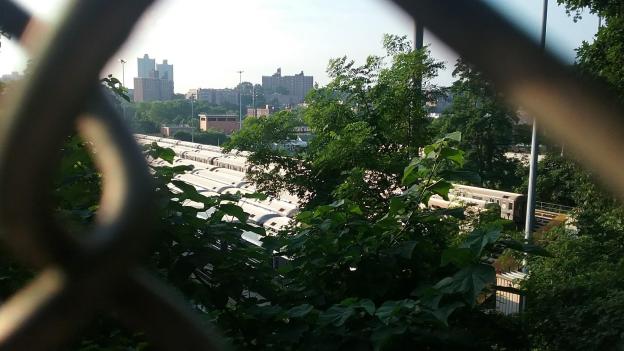 OK, back to the elevator banks. So, I entered the building, made it through security smoothly this time, and headed up to the 50th floor to meet my host. This is when I found the extra bank of elevators. There are 8 going to the really high floors (31 and 45-54). Once we met, we needed to go to the security badge office on the 35th floor. That meant going down to 31, then changing elevator banks and going back up to 35. After I got my badge, I wanted to go to the 12th floor, so I got back on, took the elevator to the lobby, switched banks again, then back up to 12. I’m glad I don’t have to do that everyday. Some people do – the cafeteria is on the 7th floor, so if you work on 50, you go down to the lobby, then back up to 7, and back again to get back to work. I’d take a five day supply of lunches on Monday, and eat in the office for the rest of the week.

I left the building around 2:30 and headed to my next site. I got about half a block away, and stopped. I didn’t need to be at the next site until four, though I wanted to be there sooner so I could observe the class. Observing the class actually means finding girls who look disengaged and re-engaging them if it’s hands-on coding time. Disengaged usually means stuck. So, we unstick them.

I thought, “You know what, you forgot to go to the Marriott Marquis yesterday to ride the elevator, and you’ve got a little time now, and you’ll probably forget again and again, so just do it.” You’ll remember, of course, that the Marriott Marquis was the first place in the world (update, North America. I’m so disappointed) to have destination dispatch elevators. Of course, if you are in Times Square, that is your highest priority, right? Ride the elevators! OK, really, it was the only thing in Times Square I was interested in doing. I will say though, that there were quite a few street characters today, and I bet it was HOT in those costumes – except for the two enterprising young women in very small red, white, and blue bikinis (I just typed blur instead of blue), large red, white and blue feather headdresses, and very little else except some patriotic bodypaint, N on one cheek, Y on the other. I’ll let you choose the meaning of cheek. Not that I was paying that no nevermind.

Not knowing what I’d face in terms of security in the hotel, I will admit to spending quite a lot of time in the past few days coming up with some plausible reason I would want to ride the elevator to a high floor in a hotel I’m not booked in, don’t know anybody booked in, and have never even been in. My solution was essentially to repeat the geeky story I’ve already told you about them being the first destination dispatch elevators, wearing a goofy smile, and hoping for the best. I’m a shrewd planner, I am.

So in I went. I pretended that I belonged there (half the battle, right?) and walked right to the elevator bank. A gentleman was right behind me, and he pressed 43, so I followed him on. Two other people got on, going to 7 (restaurant) and 8 (lobby). Up we went. The people got off at 7 and 8, then the gentleman and I rode up to 43. Here’s a picture of me riding the elevator. It is poor quality, because I didn’t want to raise suspicion by photographing inside the hotel, so I pretended I was just texting. That explains the awesome angle of the shot.

That’s what I look like to my phone when I text.

So, up we went. He got off on the 43rd floor, I stayed on. Clearly he wasn’t paying attention, or he’d have noticed that no other floors were pushed. There is an indicator panel inside the elevator door which shows its destinations (makes sense, right?). So the doors closed behind him. The elevator does nothing. It doesn’t have a destination, so it just sits there on the 43rd floor.

I thought “Ah, it needs a destination. I will simply get out, request the ground floor, and hop back on the elevator which is already waiting for me.” Then I pressed the “Open doors” button. Nothing. Again. Nothing. Once more. Nothing. I’m trapped. Hmmm.

Nothing to do but wait. After a few seconds, maybe 15, though it felt like forever, the elevator started to descend, and wound up stopping at the lobby level on the eighth floor. It just stopped. “Door open”. Nope. Nothing. Still trapped. Finally, it started to move again, and the door opened on 7, so I leapt out.

Once the elevator of doom had continues on its mission of scaring the bejeezus out of people, I requested the ground floor. It said to go to Elevator O. I didn’t even know there were that many. I hopped on, rode it down, and exited, gleeful in my new found freedom.