Chicago is a small town, you know, like Middlefield – the kind of place where you can just bump into someone you know and have a chat. Why, just yesterday, I was climbing the stairs (I’ve been doing that more, lately. When I got here, all the stairs were hard. I’ve been working on getting better at them. Now a double flight of stairs is NBD, even at the end of the day) in the Thompson center up to the L, when who should I see coming down the escalator? None other than Christina Marshall, the brains behind yourelu.com, the Beauty Made-to-Measure clothing source for women with curves, who I met on a GWC field trip a couple weeks ago. We recognized each other right away. Since I was on the stairs and she was stuck on the escalator, I turned around and headed down so we could continue our conversation. I had just read the girls’ journals that morning and had noted that several of them had mentioned Christina’s presentation was one of the most influential events in the program for them.

The prompt: What event or activity so far in the Summer Immersion Program has had the greatest impact on the way you think? What new knowledge did you gain in that event? What assumptions did you make before it that were challenged?

One girl’s answer: My favorite event in the SIP was when we listened to Christina’s speech. It impacted me in how it showed me that persistence, practice, and determination was required to succeed. My assumption that I had it hard was challenged because Christina’s story was full of unfortunate events and she has risen through it all.

(Words to live by: You never know whose hero you are.)

I told Christina how inspirational she was for so many girls and thanked her again (Words to live by II: If you can pay someone a sincere compliment, just do it). She told me how happy she was to have had a chance to speak to our girls, that GWC was a great program, and if there was anything she could do for the program to let her know.

Today being Saturday, it is Adventure Day! After early yoga (and a nap) this morning Ellie and I set out north. It is a glorious day, still warm and sunny, but the humidity is pretty low – an excellent day to ride along the Lake Shore Trail. I wanted to go to the Lincoln Park Farmers’ Market (LPFM), which had closed ten minutes before I arrived the first time I found it.

It was still fairly early when I set off, so the trail wasn’t too busy, although it picked up as I progressed. Sadly, I had to pass the Chicago Hot Dog Fest since it hadn’t opened yet. Maybe tomorrow. (I ate a Vienna Beef [Hot Dog Fest’s sole supplier] Chicago Style Hot Dog from a street vendor on Thursday, and quite liked it. Hot dogs, like cookies, are a sometime (sic) food.  Not too far away, the LPFM was in full swing. Fruit and veggies are plentiful now, but I was in search of my breakfast and possibly dinner.

I rolled Ellie gingerly through the crowd and found a place that sold a Chorizo and Egg Taco that was quite yummy. We circled the market, noted that it would be open for two more hours and continued our northerly passage. We left the market on North Clark Street, and I observed a small line of people across the sidewalk a few hundred yards ahead, stretching away from the side of the small truck. As I got closer, I found this! 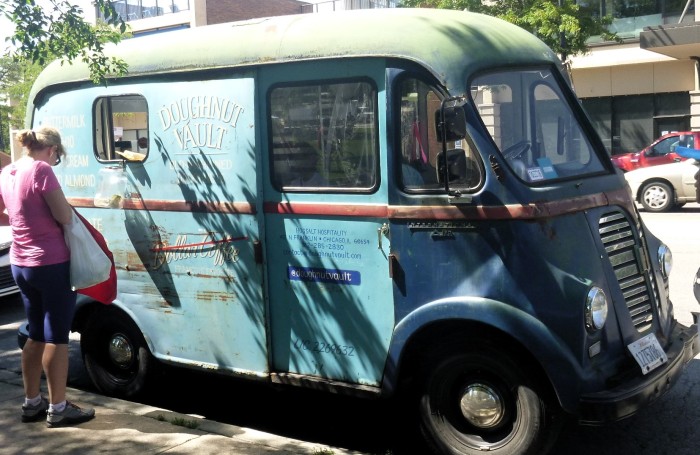 In case you aren’t too familiar with how to do Adventure Day, when you see a truck labeled Donut Vault with a waiting line and it is Adventure Day, you get in line, and you ask for any kind of donut and when they hand you the bag, you do not ask what kind they put in because IT IS AN ADVENTURE! I got Coconut Cream. And it was worth it.

I hadn’t gone much farther when I found this New England connection. It is a memorial to David Kennison, the last survivor of the Boston Tea Party. He was a pretty famous guy here in Chicago, and has quite a legacy, a lot of which is in dispute (Did he really live to 115 years, 3 months and 17 days?) On the other hand, the fact that he had twenty-two children is not in dispute. Nor is the fact that he fought in the Battle of Bunker Hill.

We traveled next to the western side of the zoo which I hadn’t seen yet. The gardens there are quite beautiful. I stopped to refill my water bottle at a fountain (there is a working water fountain about every mile along the trail), when I was passed by an unusual contraption. It looked like part bike, part padded wheelbarrow. There were two kids about four or five in strapped in the wheelbarrow part, and one younger kid in a child seat behind the man (father, I guess) propelling the craft, speaking French to the children as he rode. Three kids? What a load!

We continued along. I wanted to see if we could reach the northern end of Lincoln Park (it is huge – about seven miles long) and make it back before the Market closed. We made it up there, and I was kind of tired because we were going against the wind the whole way. I kept telling myself that at least it would be at my back on the way home. I turned around (the trail has a convenient small loop around a garden for turning), and rode a little bit and what did I see? That French guy! Still hauling his kids, happy as can be! More power to him.

Earlier, on my way out of the farmers’ market, I noted a taped off bike parking area on the north side of the market. I headed for it on my way back. When I got there, I looked for a way to lock Ellie up, and noted that none of the bikes were locked – even the bikes that had locks. A young man with an apron and name tag greeted me as I approached the area. I asked him what the deal was. He said “Free valet bike parking.” What?!? Who ever heard of that? “Free?” “Yes, until 1pm.” That is when the market closed. OK, so Ellie got free valet parking. She felt super special. She is a rescue bike, and not yet used to good treatment.

I re-entered the market knowing exactly where to go: Wholesome Harvest for bacon, then elsewhere for lettuce and bread – dinner is BLTs tonight (I got tomatoes at the Daley Plaza market on Thursday). Turns out, Wholesome Harvest had lettuce, too, so I got some and found good bread at a bakery stand.

Now I am home, and as soon as I finish this up, I’m cooking dinner for my roommate and myself. (I’m pretty sure that’s grammatically correct, but if not, I know someone with the right personal brand will tell me).  You know we’re having.