Who are the people in your neighborhood?

I’m going to go in reverse chronological order of people I talked to or saw today, some of whom I see on a regular basis, even though I don’t know who they are.

I’ve got to start with the guy I talked to while I was walking to the hardware and grocery stores today. I had intended to stop by Jsmile51 cafe on the way back, and did. You don’t want to carry refrigerated desserts around too long in this heat (it was about 92 degrees and humid). OK, now that I’m thinking about it, I have to show you what I got. Just a minute while I grab my camera. 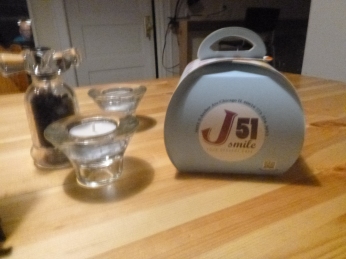 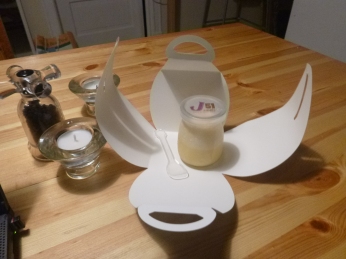 Is that not the cutest little thing? It is a peach mango panna cotta! It even comes in its own little box! And with its own little spoon! That thing is not going to last much longer than it takes me to finish writing this paragraph. Here is a nice picture of the current radar to entertain you while I eat. That storm is coming down from the north. It’ll be here in half an hour. This time, I’m staying inside. (As it turns out, the first picture didn’t save correctly, so I grabbed this one just now. Still pretty impressive.)

That was very yummy. Thank you for your patience. Nice looking storm, huh? Now I have to think what to do with the little jar.

Ok, forget that guy. It wasn’t a very interesting story anyway. On to Bella.

I met Bella on the walk home from the bus. She was laying on the grass, but got up to meet me, so I felt obliged. Truth be told, she is about three or four times larger than she should be. It makes her head look too small. And she looks much older than her six years – I thought ten at first. She wobbles more than walks. That’s the way it goes, doxies love to eat. She came up to me and quietly sniffed my hand for about ten or fifteen seconds, then decided I was an imminent threat to the neighborhood and began to bark at me. I kept talking with her owner, so she stopped after about thirty seconds. Courage of a lion in those little dogs.

I had more grandiose plans when I started typing tonight. I planned to tell you about the woman in a motorized wheelchair I see nearly every morning on the train. She gets off at the first stop in the loop. The CTA workers seem to have a great deal of respect for her. There is almost always someone ready with the ramp to assist her as she detrains, and they always greet her with a smile. Today, though, the usual person was not there to assist. The driver really hustled to get off the train, get the ramp, position it, wait for her to detrain, and then put the ramp away and hopped right back on the train. He seemed genuinely upset that she had to wait a little longer than usual.

I also planned to tell you about the round-headed man with the buzz cut. I see him board my bus so often it’s rather spooky. Given that I have about a 15 minute swing (the rain is really coming down now) in my starting time, which is about three or four buses worth, I should only see him occasionally, not four times a week. He gets on at 29th Street, so he can’t know when I start out. Unless he has a WEBCAM!!! Hmm… an inspection of the immediate vicinity seems in order. After the storm.

What really got me on this idea of people in my neighborhood was The Twins. Technically, they are not from my neighborhood, they live closer to 43rd Street. I know this because I usually see them getting on at that stop when I get on after yoga class on Wednesdays. They are identical twins and when I’ve seen them, they are dressed almost identically, most often wearing shirts which suggest that they are in an acting summer camp. They are the youngest unaccompanied people on the bus; I’d estimate their age to be about eleven. They are not completely unaccompanied. When they come to stop in the morning, they have a young man about 16 or 17 with them, possibly their brother. He boards a different bus at the same stop. This bus is a straight 25 minute shot from their stop to the camp campus and the girls sit together, keep to themselves and are likely looked after by other riders, even if they don’t know that.

The Twins are striking in their striking-ness. They hold themselves in such a regal manner that they might be princesses. There are, though, a couple of differences between them. They both have all their long brown hair in box braids. The leader twin (I imagine that every set of twins has a leader twin and a follower twin, the bold one and the more laid back one. It stands to reason – in any pair of people there is likely to be that dichotomy) has maroon highlights, while her sister has bronde.

What brought them to the forefront of my attention today was the fact that they were sitting in front of me on the bus in one of sideways facing seats. They were both silently singing songs as they rode along. I think they were listening to them in their neck headphones.  The bolder sister noticed something and wanted to signal it to the other sister – mainly using eyebrow communication.  If they talk at all on the bus, it is completely inaudible. Her intent was either misinterpreted or ignored, so she texted her sister. And there they sat, next to each other, texting back and forth.

They are so young and beautiful and funny, and it seems, at least outwardly, that things are going pretty well for them. I hope that continues, as unlikely as that may be. A student in class today said to some of the other students that there are 100 missing black girls in Chicago right now. Apparently, there is only one news source reporting this, but I can’t find it. The Twins headed for a tough road, and I wish them the best.