She set me at ease immediately, “Would you like a glass of water while you wait?” Admittedly, I was already pretty chill after a challenging yoga class, but her offer took me down another notch. That was not to last.

I’ve been eyeing this restaurant for days; my bus stop is across a little side street from it. When I first walked past on Monday, it looked kind of like a closed business (there are lots of them around here, though this neighborhood has the feel of an impending resurgence). The sign outside was no help: Nana. Sort of a comforting name, especially if you are alone in a new city, but a quick glance inside as I walked past yielded no clue as to what their business was.

Then, as I was searching for a place to eat yesterday (I googled “restaurants near me”), Nana (nanaorganic.com) came up as a well-reviewed, local, organic, sustainable restaurant, and the prices are decent; PLUS it’s only a six minute walk away! I knew I had to try it before the summer was over. When I can, which is almost always when I’m traveling alone or with my family, I try to patronize locally owned businesses. I prefer to have my money stay in and support the community I am visiting.

I was parched after yoga, so I relaxed even more when another waitress offered me a second glass of water. I don’t think I’ve ever been offered a drink while waiting for take out  – certainly not twice. As I settled into my tranquility, I gazed absently down South Halsted Street, watching the infrequent foot traffic meander by.

Suddenly, the sky strobed white, then became dark again. I was a little taken aback, but I had conversed with several classmates at yoga: thunderstorms were expected, I thought at eight o’clock, they had heard later. One mentioned the possibility of a tornado. Still, that was later. I relaxed again and waited.

The sky began to flash more ominously and frequently. Were we going to get hit early? I slid to the edge of my seat (about half the chairs in restaurants here are those high stools), and began to look around. I saw, with a sense of relief, the waitress put a box into a bag. I was the only to-go customer, and I was ready to go! The wind was beginning to pick up. She looked into the bag, then set it on the counter in front of the chef, and said something to him I couldn’t make out, and walked away.

I had ordered their grilled chicken sandwich (chicken from a local farm – I asked. By the way, if you’ve never had chicken raised in a sustainable way, by a farmer which you are only one or two degrees of separation from, I recommend you do. It’s a different bird. There is something extraordinarily comforting about knowing who grew your food. Seriously.), and it came with a side dish. I ordered “farmer’s vegetable, seasonal selection, ask your server” which turned out to be grilled zucchini. It’s early for zucchini, I know, but it was delicious after such a long hiatus. Although it’s early for zucchini, this particular zucchini was taking it’s sweet time getting cooked. “It’ll be ready shortly,” the waitress told me. She must have noticed me beginning to fidget and offered me a third glass of water. I declined – the sky was flashing like a dance club. Mercifully, they brought the bill before the food, so when my meal was ready, I grabbed the bag and headed out the door. No rain yet.

I walked the half block to my street, and as I turned the corner, a man lurched off the step of what used to be a corner store, and said “Come on, let’s go.” I was startled, but because he had his back to me, not too worried. I turned the corner, and his dog, a small schnauzer mix,  ran toward me barking. When she saw I wasn’t afraid of her, she immediately calmed down and walked up to sniff me. She bored of that quickly and moved on.

I had to hoof it. I started counting the seconds between the flash and the boom, “One one thousand, two one thousand, three one thousand, … seventeen one thousand”. Ok, not too bad. All the way home I counted, over and over. I started with every really bright flash, hoping for a clear report to make the count certain, but the flashes were coming faster than the thunder, rendering my task impossible. The wind continued to pick up, and at one point brought the oddest scent: watermelons. For about three full breaths, I sensed their unmistakeable aroma.

Finally, I reached my gate, pushed through and climbed to the second floor. I unlocked the door, and dropped my bag on the table as the skies opened up, glad to be safely at my home away from home. Man, that was a good chicken sandwich. 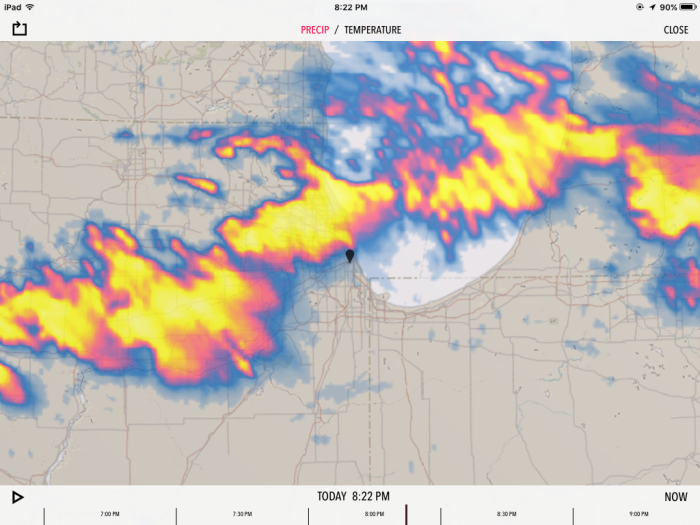